Our measures against Covid-19. Detail
Places To Visit 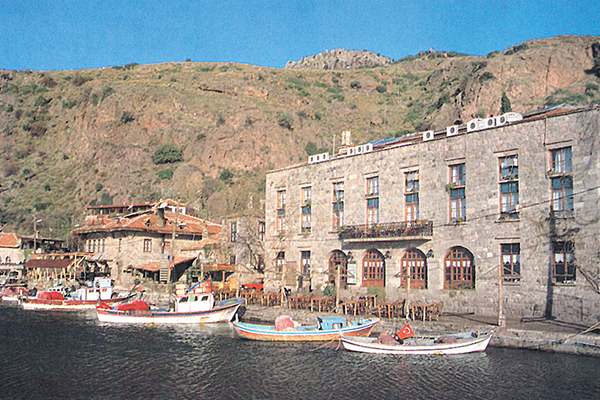 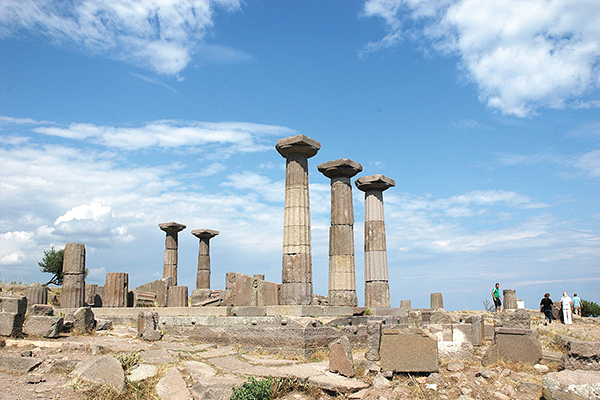 While enjoying the sun and the sea, at the same time there are places worth to see. As nature, history and cultural sense Behramkale is one of the most important place which hosts Asos ancient City. Behramkale; Aristotle and phislosophy school entertainer, a challenging bishop center during Byzantium with its four thousands years history.

It‘s a nice travel and holiday destination with stone houses, ancient port, blue flag beaches; Kadirga and Eden. Nature and history. Nature and history, sea and mountains are nested. Palace Hotel Olive Odore is located 25 km away from Behramkale. Twisty heels take visitors to Acropolice os Assos which is 238 metres high above the sea level and the temple of Athena was built here in B.C at the 6th century . The ancient port is good for to feel the bohemian air. 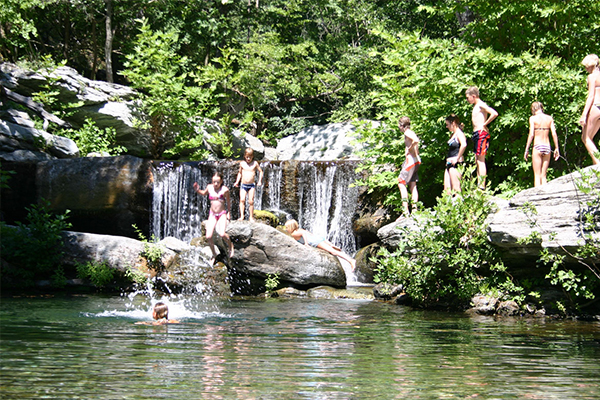 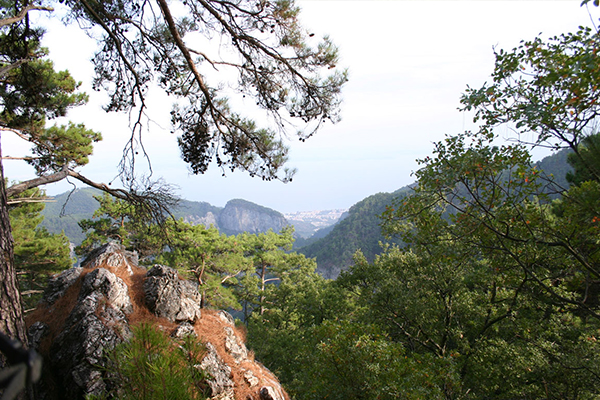 In Greek mythology, two sacred mountains are called Mount Ida, the "Mountain of the Goddess": Mount Ida in Crete; and Mount Ida in the ancient Troad region of western Anatolia (in modern-day Turkey) which was also known as the Phrygian Ida in classical antiquity and is the mountain that is mentioned in the Iliad of Homer and the Aeneid of Virgil. Both are associated with the mother goddess in the deepest layers of pre-Greek myth, in that Mount Ida in Anatolia was sacred to Cybele, who is sometimes called Mater Idaea ("Idaean Mother"),[1] while Rhea, often identified with Cybele, put the infant Zeus to nurse with Amaltheia at Mount Ida in Crete. Thereafter, his birthplace was sacred to Zeus, the king and father of Greek gods and goddesses. Kucukkuyu is a town in Ayvacik district of Canakkale Province. It is a coastal town at the north shore of the Edremit Gulf of Aegean Sea. The Greek island Lesbos is at the south west. The Ida mountains of the mythology is at the north. Distance to Ayvacik is 25 km. and to Canakkale is 95 km. 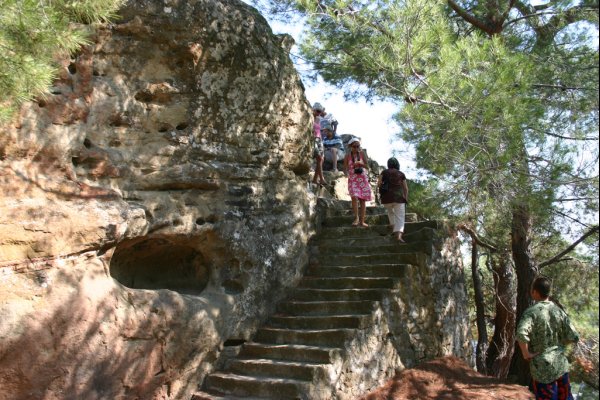 Mount Ida is the island's highest summit, sacred to the Goddess Rhea, and wherein lies the legendary cave in which baby Zeus was concealed from his father Cronus. It is one of a number of caves believed to have been the birthplace or hiding place of Zeus. On the flank of this mountain is the Amari Valley, the site of expansion by the ancient settlement at Phaistos. Its modern name is Psiloritis. The surrounding area and mountain used to be very wooded. Altınoluk, formerly Papazlik, is a town and summer resort in the Edremit district of Balıkesir Province in western Turkey. It is located 25 km. west of Edremit, at the northern coast of Edremit Bay and on Mount Kazdağı hills. 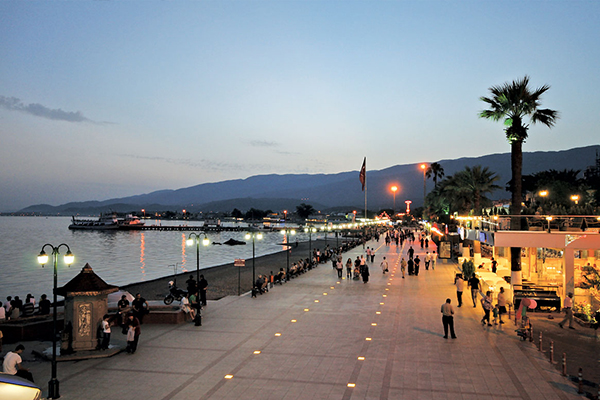 Akcay (in Turkish: White Creek) is a municipality in the Edremit district of Balikesir Province in western Turkey. It is located in the Edremit Bay at the coast of north-eastern Aegean Sea, across the Greek island Lesbos.

Akcay is 10 km. west of Edremit on the highway D560 (E-87) to Altinoluk. With its long beach and clear sea, it is a highly popular summer resort for domestic tourists. Its population grows around tenfold in the summer season. The very cool groundwater running into the sea keeps the sea fresh all summer long.

Akcay has a mild climate in summer months; it is warm and dry, which makes it very attractive for tourists who prefer a low-key vacation without the crowdedness and the humid weather of the southern vacation resorts such as Antalya and Bodrum.. 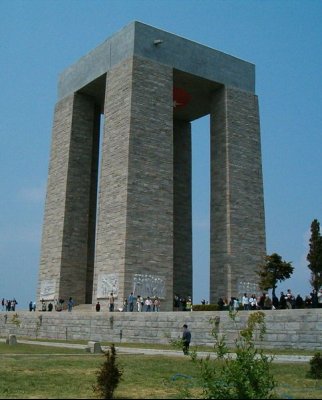 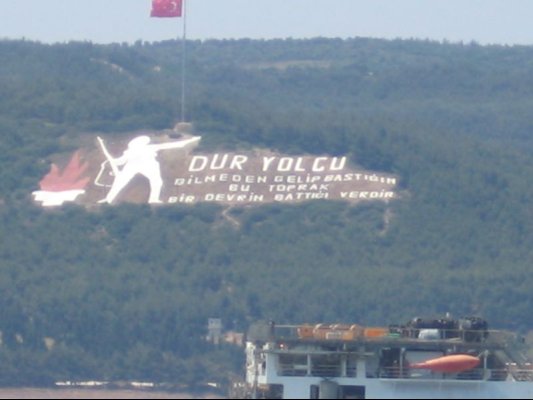 Canakkale is a city and seaport in Turkey, in Canakkale Province, on the southern (Asian) coast of the Dardanelles at their narrowest point.

Canakkale Province, like Istanbul Province, has territory in both Europe and Asia. Ferries cross there to the northern (European) side of the strait.

Canakkale is the finishing point every year for an organised swim across the Hellespont from Eceabat. This event emulates the swim in 1810 by Lord Byron, who was himself emulating the legendary swim by Leander in the story of Hero and Leander.

The city is the nearest major town to the site of ancient Troy. The "wooden horse" from the 2004 movie Troy is exhibited on the seafront. Canakkale is the second city to be situated on two continents after Istanbul, but Çanakkale is closer to mid-division than Istanbul. Near the suburb of Camlik, on top of a small hill, is the best viewpoint in Ayvalik. There, you’ll find a rock with a curious footprint called the Devil’s Feast.

Apparently, the Devil left it in the rock when he jumped over to Lesbos. From the top, you have wonderful panoramic sites of the pine forests, seas, islands and the city.

There is no better place in Ayvalik to spend your sunset. Troy was a city situated in the far northwest of the region known in late Classical antiquity as Asia Minor, now known as Anatolia in modern Turkey, near (just south of) the southwest mouth of the Dardanelles strait and northwest of Mount Ida. The present-day location is known as Hisarlik. It was the setting of the Trojan War described in the Greek Epic Cycle, in particular in the Iliad, one of the two epic poems attributed to Homer. Metrical evidence from the Iliad and the Odyssey suggests that the name Ἴλιον (Ilion) formerly began with a digamma: Ϝίλιον (Wilion); this is also supported by the Hittite name for what is thought to be the same city, Wilusa.

A new capital called Ilium was founded on the site in the reign of the Roman Emperor Augustus. It flourished until the establishment of Constantinople and declined gradually in the Byzantine era.

In 1865, English archaeologist Frank Calvert excavated trial trenches in a field he had bought from a local farmer at Hisarlık, and in 1868, Heinrich Schliemann, a wealthy German businessman and archaeologist, also began excavating in the area after a chance meeting with Calvert in Canakkale. These excavations revealed several cities built in succession. Schliemann was at first skeptical about the identification of Hisarlik with Troy, but was persuaded by Calvert and took over Calvert's excavations on the eastern half of the Hisarlik site, which was on Calvert's property. Troy VII has been identified with the city that the Hittites called Wilusa, the probable origin of the Greek Ἴλιον, and is generally (but not conclusively) identified with Homeric Troy.

Today, the hill at Hisarlık has given its name to a small village near the ruins, which supports the tourist trade visiting the Troia archaeological site. It lies within the province of Canakkale, some 30 km. south-west of the provincial capital, also called Canakkale. The nearest village is Tevfikiye.

Troy was added to the UNESCO World Heritage list in 1998. Ayvalik is a seaside town on the northwestern Aegean coast of Turkey. It is a district of Balikesir Province. The town center of Ayvalik is surrounded by the archipelago of Ayvalik Islands, which face the nearby Greek island of Lesbos.

It was alternatively called Kydonies by the town's former Greek population; although the use of the name Ayvalık was widespread for centuries among both the Turks and the Greeks, pronounced as Ayvali by the latter.

Stay informed of our campaigns